Read about how ileostomy surgery, a strong support community, and the right ostomy products helped Tania overcome her health challenges. 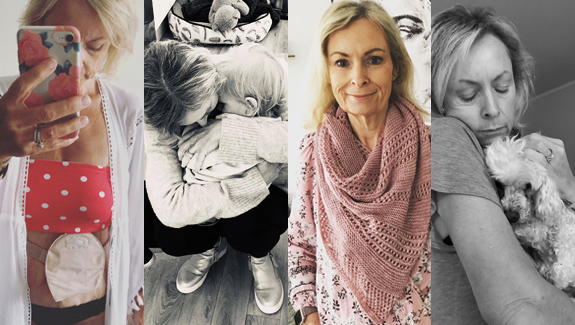 Learn how Tania regained her life after ileostomy surgery.

My name is Tania and I am a 53-year-old wife, mother, daughter, and sister. I live in New Zealand and have four grown children and two grandchildren. Family is the most important thing to me in the world. We are all very close and love spending time together.

Just over two years ago, I became very sick. I was in so much pain, and my bowels felt like they were going to explode. I found it extremely difficult to eat and I couldn’t do anything.

I had an operation called a rectopexy. This is where the surgeon implants mesh on both sides of the rectum and secures it to the sacrum (the large, triangular bone at the base of the spine) to hold the rectum up and stop it from blocking the exit. I had several other operations to try and help but nothing worked. The problem was that the mechanics of my colon had failed.

Since then, I have been diagnosed with intestinal failure and gastroparesis. Gastroparesis is a delayed emptying of the stomach. So not only was it hard for everything to come out of my stomach, it was also hard for anything to get in!

I decided to get an ileostomy. The surgery went well except I developed a parastomal hernia the day my stoma was created. A parastomal hernia is when the intestine protrudes through the abdominal muscles around the stoma. Here is probably a good place to mention that I have a condition called Ehlers-Danlos Syndrome, which affects the integrity of the connective tissue in my body. This is the reason for the prolapses and paralysis in my digestive system. It is also the reason for the hernia, as my connective tissue is weak and difficult to stitch together. I have mesh all through my body because of hernias and prolapses.

When I first had the ileostomy formed, the hospital used their regular ostomy products on me. Within days, I was covered in a rash. It was awful. Also, within two weeks of getting my stoma the hernia had strangled and I had to have urgent surgery at Auckland Hospital. It was after that operation that I woke up wearing a two-piece Hollister pouching system. That was over a year ago and I’ve never looked back. My skin loves the CeraPlus skin barrier!

Living With My Ileostomy

It’s amazing how much easier my ileostomy has made life for me. I am no longer in excruciating pain from the constipation and the prolapses. I’m sleeping really well for the first time in as long as I can remember. I’m also able to participate in activities with my husband, children, grandchildren, and extended family – which makes me so happy.

When you’re living with a stoma, the most important thing is to be comfortable. You want to have nice, smooth skin, and not have any irritation. Thankfully, my ostomy products are helping keep my peristomal skin healthy. I’ve had a few hiccups with my stoma because of the Elhers-Danlos, which has meant several surgeries to put it back into place, but we have finally got there. I also have transitioned to a CeraPlus soft convex flange, which helps my stoma stay put and always be protruding.

Getting a stoma for whatever reason can be a very scary and traumatic time, especially depending on your circumstances. But it doesn’t have to be extremely difficult. We have a tremendous community to help us get through the stages of growing used to the changes in our bodies. I am so thankful to medical science, my healthcare team, my ostomy products, and my family, for supporting me all the way.

Hobbies, routines, experiences — your story can inspire others.