A Passion for Lifting Up Others

Entrepreneur, professional speaker and poet Stephanie Bension shares how she developed a positive outlook on life, and inspires others to do the same. 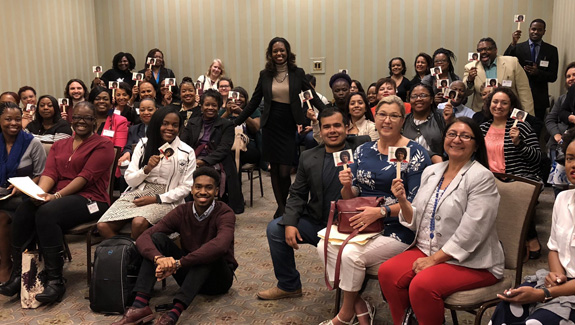 Stephanie Bension comes alive when she’s in front of an audience, when her listeners are charmed by her giant smile and bright personality, and hanging on her every word. For Stephanie, public speaking is not just a hobby — it’s a calling. She wants to be known for bringing back the art of oration, following in the footsteps of verbal greats such as Martin Luther King Jr. and Barbara Jordan.

In 2017, when Stephanie was hired to speak at a medical conference in California about patient care, she confirmed that her passion could become a paid profession. Her speaking career continues to blossom, but it was a long and arduous journey to get to this point.

In 2004, when Stephanie was in high school, she was diagnosed with a combination of Crohn’s disease and ulcerative colitis. Her gastroenterologist became her medical guardian angel, and her devoted mother and sister were also big sources of support.

Despite her illnesses, she was able to attend the University of Texas at Austin. She made the Dean’s list her first semester, but every semester after that was riddled with trouble. During her junior year, she became so sick that she had to rest in her car after classes in order to have the energy to drive back to her apartment and complete her assignments.

Stephanie understood the precarious position she was in, but she persevered. “I felt that if I didn’t finish college then, I would never go back,” she explained. “But eventually I got so ill that I had to go home to Houston.” Near death, she was sent to a specialised hospice floor of St. Joseph Medical Centre. Her doctor had tried everything and was at a loss, but he had the wisdom to seek the advice of a colleague who suggested Remicade® infusions.

Fortunately, the infusions worked, and Stephanie was released from the hospital. With a new lease on life, she returned to college and graduated with a degree in Radio-Television-Film. Then, she moved to Las Vegas to live with her father and stepmother, and pursue a career in marketing.

Though she experienced some ups and downs with flare-ups, Stephanie was enjoying life in Las Vegas and doing well at work. In 2013, however, her diseases reared up again. At 24 years old, she found herself in the emergency room faced with the reality of receiving an ileostomy. “When they gave me the choice of getting an ostomy or dying, I chose to live,” said Stephanie. “It was all so fast; at the last minute, they told me that a hotshot surgeon had flown in and was able to do my surgery.”

Upon waking up from the successful procedure, Stephanie refused to look down at her stoma and pouching system until the day that her 12-year-old brother came to visit and asked to see it. “He said, ‘Wow that’s so cool!’” said Stephanie. “And that’s when I finally looked at it and knew everything was going to be OK.”

During her recovery, she was surrounded by her compassionate family – including her baby cousin Shiori, who thought that Stephanie was Beyoncé. However, Stephanie struggled to heal because her incision would not close. One day, shortly after she came home from the hospital, the dam finally broke and she could not stop crying. Her dad held her, and explained that her mind was finally catching up with her body.

“I was grieving; I came to a point of acceptance that pre-ostomy Stephanie was gone and never coming back,” she explained. “That simple realisation was heavy, but knowing that helped me push through the rest of my recovery and the rest of my life.”

Sharing her story with others

Up to that point, only her loving family knew her story, but she knew she had to share it with others. The next hurdle was finally posting what she had gone through on social media. “Some people had known me, but never knew about everything I was going through,” said Stephanie. “When they found out, they were absolutely amazed.”

Going public was a big step, and Stephanie received a swell of support. As with most chronic illnesses, however, the journey wasn’t over. At a checkup back in Houston in 2016, she learned that she had disease in her rectum that had to be removed. Doctors had saved her rectum in the hopes that one day her ostomy could be reversed, but now that hope was gone. “They removed my rectum and sealed my anus,” recalled Stephanie. “I woke up with what I call Barbie butt.”

After that surgery, Stephanie felt new levels of sadness. As a male friend sat with her during recovery, she shared her worry about not finding someone to love her. “He told me, ‘If anybody can’t see past your ostomy, then they’re missing out on a real blessing,’” she said. “Hearing that from a man really helped me along, and now I’m dating!”

Stephanie’s current love interest wanted to know everything about her ostomy. He also promised her she’d never have to do it alone, and that life is meant to be shared. “That pre-ostomy girl is gone; he never got to meet her, but he still wants me,” she said. “And even if I don’t end up with him, he has opened me up to knowing that there will be someone who understands like he does.”

Finding a community…and a new career

That understanding has proved vital to her outlook on life, and her advice to ostomates is to find your community. “It will help get you through all that darkness,” said Stephanie. “Even if it doesn’t include others with an ostomy at first, just being insulated by friends and family will bring you joy, and that joy will give you enough strength to survive.”

Stephanie has been a professional speaker since 2017, winning over audiences with her energetic presence and making a connection on every stage. Her topics include overcoming adversity, living with a chronic illness, having an ostomy, struggles unique to women, and more. She loves talking to all kinds of audiences – from youth to the elderly, and professional to personal.

Even though the isolation and limitations of COVID-19 have brought back feelings of helplessness she experienced in the hospital, Stephanie keeps her eyes on the future. She plans to continue speaking professionally and advocating for people with ostomies. She is also determined to live a full life that could be used as an example to inspire others. “I want to have a beautiful family, and show as much love as I have been given to as many people as possible,” she said.

When asked if she has any other future plans, Stephanie borrowed the sage words of her father, “Keep Livin’!”

Stephanie Bension is a professional speaker who charms diverse audiences—from her local community to international assemblies. She holds a degree in Radio-Television-Film from The University of Texas at Austin, which has allowed her to have unique experiences in several professional fields. Stephanie credits her successes to God and a close circle of friends and family. You can find her on social media @missbension and at www.stephaniebension.com.

Financial Disclosure: Stephanie Bension received compensation from Hollister Incorporated for her contribution to this article.

Hobbies, routines, experiences — your story can inspire others.